← The Rabbit’s Magician ~ Behind the Smoke and Mirrors ~ A Little Alchemy For 2011
Gaia – Earth Mother and Turtle? Ancient Wisdom For Conscious Living →

I was drawn to intuitively check in today after a flow of inspiration was coming in and received guidance that some of my crystal creations are highly activated in seeking out their keepers right now, some of which are below and include the amazing Libyan Desert Glass Tektite, amongst other potent crystals. They are eager to align in helping to shift the earth energies that comes with synergizing into union with their chosen companions to support in healing. In light of this I am offering these four amazing pieces at very special prices. If you feel called to one, do let me know. (Shipping will be added to the prices reflected.) If you would like more information about the properties of the given crystals let me know and I will send that to you. Read on to discover the magic of Libyan Desert Glass Tektite.

The paraphrased words on Moldavite from “Love is in the Earth” author, Melody: “A pathway of inter-dimensional access to the highest Galactic energies, bringing higher thought forms and patterns through to the Earth plane. A multi-dimensional passage into other realms” equally apply to Libyan Desert Glass. The difference between the two being that Libyan Desert Glass is said to operate with direct focus on the Vishudda (throat) and Anahata (heart) centers, rather than operating in the higher Chakra realms. This quality of its essence creates a source and contact for universal love and harmony, as it acts as a channel for bringing Cosmic energies directly into the center of being. It is for this reason that Libyan Desert Glass was the jewel of Tutankhamen, designed to be worn over the heart in his breastplate, making it a highly sought out gemstone of the pharaohs and royalty. 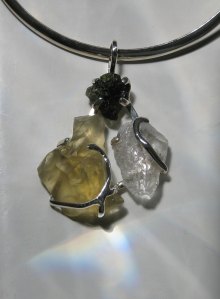 As a tektite, it is very unusual in being nearly clear and a beautiful pale yellow to green and sometimes with touches of amber to greenish brown color. The vast majority of tektites (natural glass rocks up to a few centimeters in size, which scientists say are formed by the impact of large meteorites on Earth’s surface) are black, with the exception of the beautiful cosmic green Moldavite. This shining impact Libyan Desert Glass ranges from opaque to translucent. Sometimes golden in hue and even with white opaque areas, Libyan Desert Glass also varies in surface texture from having an extremely smooth quality to being covered with small to medium sized, circular indentations, reminiscent of the lunar surface.

Known to scientists since the 1930’s, it is believed, according to scientific knowledge, that this tektite emerged from a collision of a meteorite with Earth nearly 29 million years ago (about 28.5 to be more precise) and is found only in a remote area of the Great Sand Sea of Egypt near the Libyan border. Relatively abundant, they are found in massive deposits with some estimates saying there may be as much as 40,000 tons of it lying on the surface of the desert amongst a small area measuring approximately 130 x 52 km. To others, the origin of Libyan Desert Glass still remains a mystery, with some attributing their existence to an ancient nuclear explosion, others to involvement with extraterrestrial activities, some believing they are pieces of our moon, but modern science explains their creation as result of a meteor impact, although no crater of suitable size or other evidence in support of this has ever been found nearby. Regardless of their mysterious creation, it is for sure they are of extraterrestrial origin. 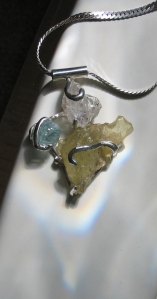 Dream Weaver: Libyan Desert Glass Tektite, Aquamarine & Herkimer Diamond in Silver This piece is a little over 2 1/2" long including clasp, a little over 2" wide and a little over 1/2" thick at widest part of tektite. Regular Price: $695 Special Price: $444

Libyan Desert Glass is an exceptionally pure form of primarily silica glass formed at extremely high temperatures, too high for normal volcanic activity. According to the impact theory of a meteor striking the Earth’s sand, which is also composed of primarily silica (silicon dioxide), it caused a fusion of sand with intense heat and pressure. Yet, there is research that supports this theory to be incorrect based on homogeneity studies, which in summary show that thin segments of thousands of studied tektites were found to be virtually free of structural inclusions, except for small bubbles. Impact glasses, such as obsidian, will always contain terrestrial inclusions due to the impact of Earth by heated material. Noted homogeneity also was found in individual tektites discovered side by side or fused together exhibiting significant differences.

This, along with typical meteoric material and the high iridium content (an indicator for extraterrestrial origin) being present indicate their classing as tektite, but it may also be that these tektites were formed by a glancing blow from some large extraterrestrial object. The truth may never be known, but there is much speculation and disagreement, you can imagine. Regardless, this ancient stone has been around for quite some time.

The Stone-Age people knew this tektite very well, discovering the glass in the Paleolithic period and lived in the area hundreds of thousands of years ago before it became desert. They had pragmatic ways of using the stone in tools, where it was used as substitute for flint stone in the form of sharp blades and graters. Yet, its the ancient Egyptians that found less practical uses for this “special” stone, as they considered it to be very precious and to hold powerful energy. By the time of the great Egyptian Pharaohs, the area was only accessible by hardy nomads who must have traded regularly with those living in the Nile valley. Therefore, due to its rarity and esoteric value, it became part of religious objects such as the scarab-carved amulet of Tutankhamen, as the centerpiece of his pectoral breastplate. For it to have been carved in the form of a scarab, which is the symbol of the Sun-god Ra, would seem to indicate that the ancient Egyptians were aware of its powerful cosmic connections that this stone draws in.

Today, Libyan Desert Glass is not only a valued and pricey gem beauty for collectors, but its esoteric energies attributed to this “rock of the god” are vastly potent. Its high costs are attributed to the cost of retrieving it on remote expedition from the uninhabitable desert. Yet, its amazing qualities, priced similarly to Moldavite, are well worth the cost to at least own one in your collection. Only recently have those working with stones and crystals started to realize and understand the huge potential that these unique tektites offer.

Some of the metaphysical properties include a long and prosperous life, balancing of male and female polarities, stimulating growth and karmic completion, strengthening the auric field, facilitating communication between the third dimension and the origin of the gem, tool for meditating and connecting with other realms and advanced consciousness, stimulating increased cosmic flow, which can result in acceleration of heart rate, spacey feeling and out-of-body experiences, strengthening and energizing the heart and chest areas and said to bring the holder great luck by ancient cultural belief. It is also a stone of teaching and resonates strongly with the energy of the Hermit card of the Major Arcana of the Tarot deck; the wise teacher who looks within for answers of the universe and receives in silence.

The way that they create inter-dimensional connections between many realms, lends energy to seeing them as “bridge builders” helping to integrate and harmonize all of existence through heart-blending at a universal, collective consciousness level. This energy, amongst others, will become increasingly important and essential as we shift our consciousness and vibrations into that of the new Golden Age of being.

← The Rabbit’s Magician ~ Behind the Smoke and Mirrors ~ A Little Alchemy For 2011
Gaia – Earth Mother and Turtle? Ancient Wisdom For Conscious Living →