Garden of the Gods by Tania Marie

An “ark” by definition and historical understanding was a vessel built by Noah to house and keep safe his family and pairs of every animal of the Earth. It is also known as a sacred chest where the ancient Hebrews kept the two tablets containing the Ten Commandments. In either form, it is seen as a sacred and protective structure that contained the promise of a new life where a new architectural system of life codes would be embraced and instituted to start anew.

We have arrived at a place of empowering renewal, where the embracing of a new code of life is upon us once again. Cycles repeat themselves, as is apparent throughout the history of this Earth for every ancient civilization that has walked upon it. There are always messages, signs and guidance being provided to catapult us into a new co-creative experience,  when we come to embrace conscious, loving presence and courageous responsibility. To me, this means the end of a way of life is completing and a new form is in process of being embraced into manifestation. 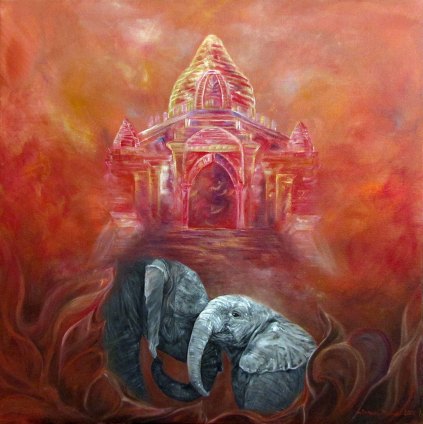 Temple of the Sacred Heart by Tania Marie

According to shamanic belief, everything is alive and carries with it a wisdom and power. Shamanism is found in all cultures of the Earth and is the world’s oldest healing tradition. This ancient, worldwide practice involves engaging with spirit helpers and the forces of the natural world to develop relationships, solve problems and perform healing. Shamans travel to the parallel worlds where time and space have no meaning and use the powers of those worlds, the subconscious and the realities of this world to cause change. They are able to go within and enter an altered state of consciousness at will, in order to contact and utilize a hidden reality that most do not consciously perceive.

According to the shamanic and ceremonial traditions of the Inca, there are those known as naguals. Naguals are a form of very powerful shamans that unlike man that is driven by psychological ego desires, they have none. They are conduits of Spirit, receiving orders from an indefinable and indescribable source. Almost a non-entity, they have learned to break the psychological conditioning of the cognitive division that keeps us cut off from our sources. They can magically assume the physical manifestation of a different entity by shifting into its energy pattern, yet remain the same in Essence, since everything is energy. There are considered to be two different forms of shapeshifting wherein either the luminous body changes into a power animal or the physical body on the Earth plane changes into an animal.

Power animals are essential to shamanic practice, as shamans believe that everyone has power animals. These power animals act as guides or angels, imbuing their individual energy, power and wisdom to guide, heal and protect you. They provide the wisdom of their kind and are not only limited to mammals, but can also be reptiles, insects and sea creatures. Any living creature can serve as a power animal and plants and trees can serve as plant spirit guides, providing their own wisdom.

Depending upon the culture, the gifts each animal provides can vary, yet there are many consistencies across the board as well. It is important to let the animal speak to you in the way meant for you and to be limitlessly open to their sharing. Shamanic practice honors with awareness the wisdom and life in all things on Earth, understanding and believing that everything has something to teach. Many western cultures do not get taught to value animals and the gifts they have to help support our lives and the world at large. Yet, animals show up for us in many ways and they are believed to communicate with us by drawing our attention to things, sometimes through repetition. They try to get our attention because they have some wisdom to impart and are most eager to be of service.

Visions of Atlantis by Tania Marie

We are all connected and we have each been part of all of the cultures, races and religions on the Earth. Animals are transcendent beings that speak to us in a boundless way, free of judgments or enculturated restrictions, which our ego minds may otherwise be closed off to. It is this reason I feel I was guided to bring forth their messages through my new series of heart-channeled creations, “Universal ARKitecture.”

It wasn’t something mentally contrived that I set out to do. I simply was supporting the intuitive visions and love I felt in my heart to express through channeled images I find an innate instinct and joy in creating. After I started to do so, it became evident what was simultaneously manifesting, as I followed my heart.

“Universal ARKitecture” was communicated to me several years ago and it basically speaks of sacred vessels, which I see as these paintings being channeled into creation. They house within them messages, codings, energy, keys….spoken through the many voices of the animal spirits of the Earth, uniting us through a Universal language of heart energy that is of the Earth and beyond. These medicine beings (naguals/power animals/spirit guides) hold antidotes for a new “ARKitectural” plan and code of life for creating the New Earth experience.

Their Essence will encompass an ecclectic tapestry of interwoven threads that may span and honor the many ancient, forgotten civilizations and world religions of the Earth’s history, as well as intertwine Earth and Cosmic dimensions. The power animals and shape-shifting “naguals” emerge through timeless energy portals to share their wisdom and powers. These channeled images I feel are supportive in guiding us with some of the keys for co-creating a loving New Earth with conscious, unconditionally compassionate awareness, embracive remembrance, visionary innovation, and empowered hearts.

I am seeing 33 paintings in total, providing loving, subtle energy to support a new existence as a Conscious Global Human Being, collectively connected in Universal Oneness.

It is my hope that these paintings will also help to bring conscious awareness of the animals on the Earth (endangered and misunderstood) – lending a voice to their expansive soul journeys, aid in supporting their precious lives, while providing deeper understanding and compassion amongst us all. We are all connected. Every living being holds infinite intelligence integral to the circle of life. Each has its own unique Essence that creates a colorful thread in the tapestry of magnificence we know as Universal Consciousness.