This is an incredibly beautiful hike that has 14 interpretive stops along the way, leading you to the cool, shady haven of the falls. 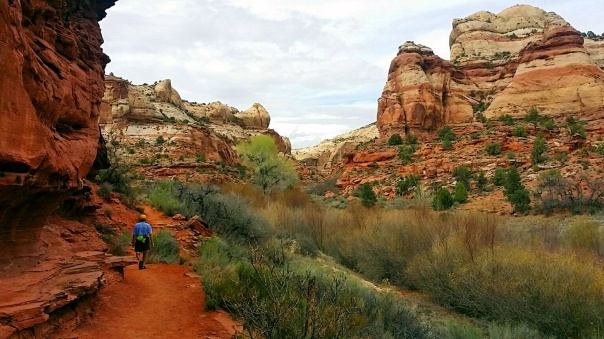 It follows Calf Creek the entire way, meanders over cliffs and through canyons, which at this time of the year was full of beautiful purple blossoms and purple cactus that almost looked painted at times with splashes of yellow. 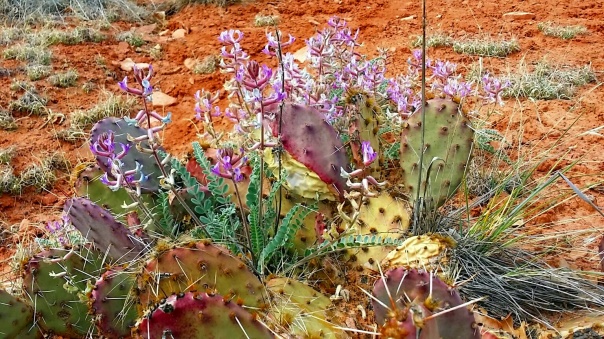 The area is also home to the North American Beaver, so we did see evidence of dams and lodges.

Above the canyon ledges were several granaries built by the ancient Fremont Culture that inhabited Utah from AD 700 to AD 1300. 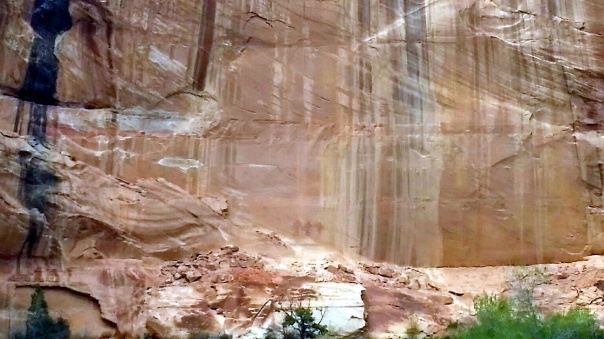 There were also incredible painted figures at the bottom of one of the smooth cliffs. These are three large figures done in red pigment and have a trapezoidal shape (hard to fully see them in the photo, as it is across the canyon, but which also shares how large they are). The three figures are typical Fremont-style rock art with elaborate head dresses and seem to be holding hands together. Only speculative ideas on their meaning are available – religious ceremonies, deities, lineages, information, maps, or even warnings.

Interestingly we saw our only snake of our trips so far, on this hike. 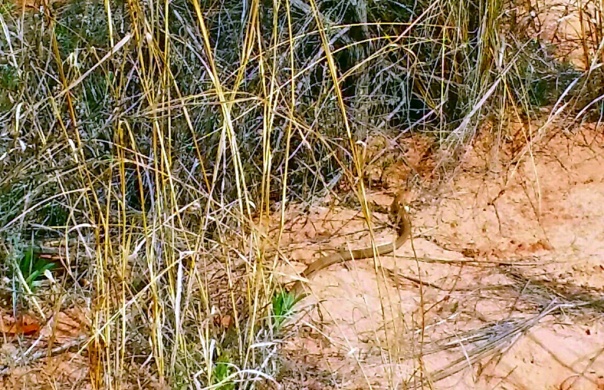 Not sure of the type, but was not a rattlesnake and likely not poisonous, but it slithered quickly across the our path ahead and into the brush quickly, then made its way out from the brush back toward us and hid under a rock. 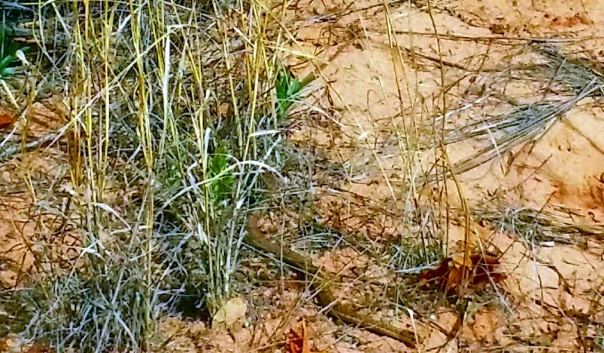 It moved quickly and seemed to time its appearance with us in order to see it, but then quickly disappeared back to the shadows.

Snake medicine is powerful and last night I also dreamed of black panther that kept coming at me….so a lot of shamanic and deep shadow, mysticism, and cosmic energies abound. Still making sense of all of the messages.

There was much lush vegetation in this wetlands habitat due to the creek, which makes it an ideal home for many animals, bird varieties, reptiles, fish, and plant life. 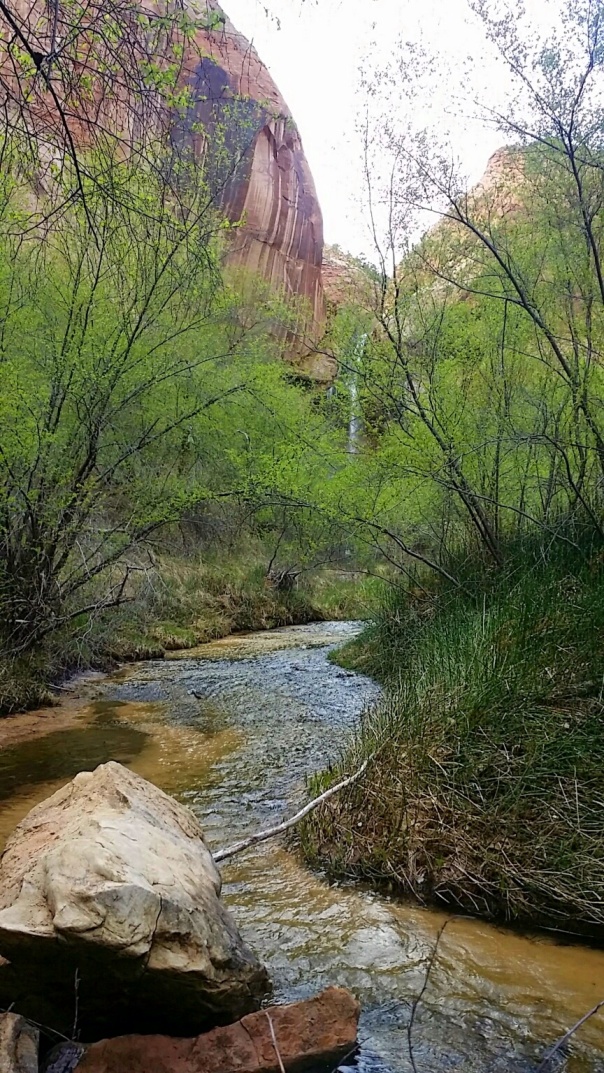 It was much colder near the falls that are set back in the shady canyon. Scarlet monkey flower, maiden -hair fern, and Easter flower are said to bloom near the seeps in the cliff walls here at certain times of the year. 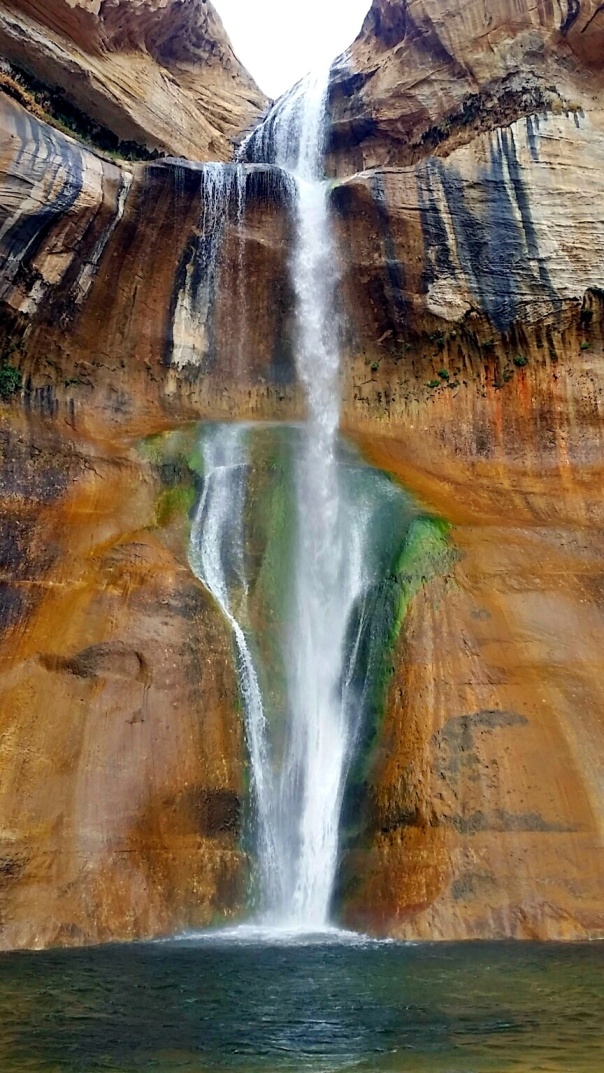 We started our day with lunch at Kiva Koffeehouse, which is a unique and secluded spot outside of the main town of Escalante on the way to our hike.

It sits atop a hill with great views all around. And to our delight, which I had called ahead to make sure of, they had a couple of yummy vegan options including a vegan fire roasted corn and potato soup and veggie sandwiches with carrot salad, fruit, home made vegan bread and hummus on the side.

Even their hot drinks like lattes, mochas, and hot chocolates all had vegan options with choice of almond, oat or soy milk… So I enjoyed a chai latte with lunch, warming up from a cold morning that was just finishing off from rain all night and first part of the day.

We have lucked out with everything, including weather, as the rain started the day before, but had only sprinkled during our time at the petrified forest, which made the wood vibrant for us. Then rained hard again after and all night and morning.

But it didn’t rain once while we were on this hike and the sky in fact opened to lovely blue skies. 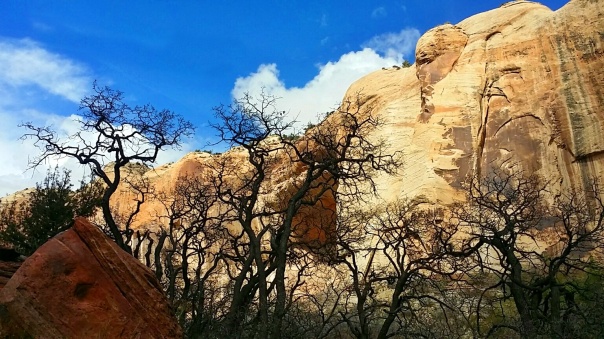 We talked to others coming back from the falls, as we were heading to them, saying that it actually was freezing and hailing at the falls when they were there right before us.

We didn’t experience any of this, but the sky did darken and gray once again when we finished the hike and made our way home, although did not rain again and today the sun is shining.

I love the image of this portal in the sky and glowing rain off in the distance, as we drove back last evening.

Another door has opened for us from our time spent here in Escalante and all that has been received.

And from the snake and black panther medicine, something big seems to be initiating and needing my embrace in a bigger way again.

I wonder what will be next as we continue our journey with three more Utah National Parks, heading off to Capitol Reef today.