← That Settles it, “Writing is Hard.” -Yeats
VegNews: BUNNIES ARE PROBABLY THE MOST AMAZING ANIMALS EVER. HERE’S WHY YOU SHOULDN’T EAT OR EXPLOIT THEM. →

A Message of Love

I just had to share this precious story of alignment and angelic presence that moved me deeply. As you know, we’ve been holding an online Easter Auction to help raise money for rabbit rescues, alongside donating 10% of proceeds from our Magick Rabbit Etsy Shop during the Easter Sale going on through April 22nd. The auction just closed last evening and what unfolded was truly magickal.

The auction item was this rabbit basket and all of its contents that included three very special crystal eggs. Bids started off slowly, but were starting to gain momentum over the weekend and last day. 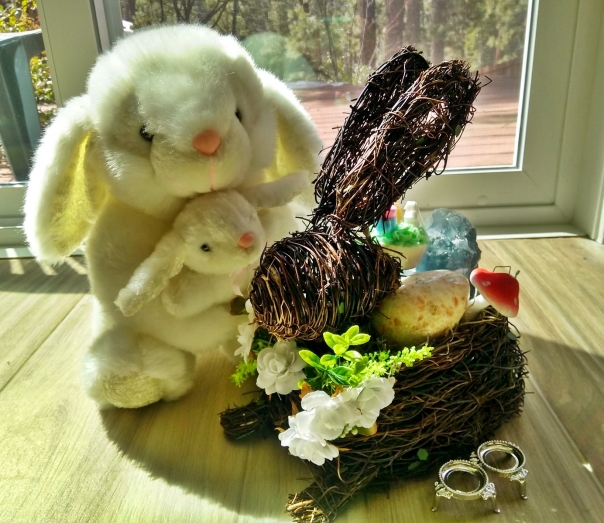 I had no attachment to outcome, but hoped to raise the optimal amount we would be able to add to our donations we’re collecting.

Bids closed at $103 yesterday at 6 pm PST, which was a steal for everything included, yet in perfect alignment and unfolding.

And here’s the backstory.

I messaged the winner, who has become a sweet friend of mine now via Instagram. She and I connected via another dear friend, Reiki student, and the guardian of the giant Amethyst Geode Rabbit and Lemurian Seed Crystal. (In fact, for my birthday she surprised me by sending a big, beautiful, sparkly gold rabbit that now sits on my bedroom dresser next to my silver Manzanita jewelry tree, overseeing all the other sparklies. She was at the store messaging me about all the rabbits she was seeing and then sent me one! I was so moved just by this, so to add the rest of what you’re about to hear, truly put icing on the cake of emotional tenderness.)

Jane was in disbelief. She couldn’t believe that no one had outbid her and that bids hadn’t gone much higher, as she was in dismay people wouldn’t want to help. She was convinced we’d reach like $500 by the end and was in shock by these turn of events.

Immediately, while she was sharing this, I started getting huge chills that wouldn’t cease, as I continued to share to her that things are just meant to be and while it had been odd to me that people didn’t seem to be seeing the post on the other channels of social media and not engaging, I also am all about surrendering to what is in divine perfection and never twist people’s arms to help. It must be from the heart.

I found out why just seconds later, or rather while I was messaging her, as she revealed the rest of her story and why she was so emotional.

She went on to share that she had chosen her daughter’s number for the last bid she placed saying, “Anaiyah this is for you, let me bid your birthday $103.”

(Side note: 2008 was actually a huge year in my life as well as my partner’s life – where we both got divorced, lost our twin soul animal companions (Nestor my rabbit and Kitty Boom Boom his cat), both went through huge life transformations on deeper levels, and met each other.)

Jane became very emotional and continued to share with me that her daughter had passed away around Easter time and sent this photo of her that was taken just a few months before she passed.

This is why it was all so crazy beautiful to her, adding also to the fact that she’d never won anything before in her life. 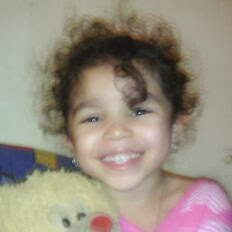 She felt that Anaiyah wanted her to have this basket because she always has a way of reaching out mysteriously and she loved bunnies. In fact, Jane has 3 bunnies in her daughter’s Amethyst collection – interesting connection to the rabbit Amethyst – and that Anaiyah’s favorite color was purple.

Synchronously, the day before the end of the auction I had posted a photo of me in a lilac/light violet dress, with purple shoes and Amethyst jewelry on.

Jane pointed out so cutely that I had to giggle, that she and I had been connecting the morning of the end to the Auction and that she knew her daughter sensed my energy and my bunnies, plus I was “rocking” a purple dress, as she put it – “She was like MOM this lady is super cool,” relaying what Anaiyah was pointing out to her.

Her mom and I also share wearing tattoos all over our bodies, so there are a lot of connecting dots.

As you can see in the photo of her daughter, she truly IS an angel. Not only an angel embodied in human form, but eternally. She also has quite the sparkle and reminds me of a bunny, in fact! I just adore her and felt immediately that my bunny angels were with her, orchestrating all of this so beautifully.

Indeed, it was perfection and I felt it was also Anaiyah’s way to send a message to mom while also lending lend support to her for things right now, and remind her of the wonder and precious joys life has to offer in surprising ways.

It also speaks to how our loved ones are always with us and never leave our hearts and sides.

The heart is the bridge and where there is love there is no separation.

I felt so deeply this sweet message wanted to be shared and asked if I could.

Jane immediately said yes, wanting people to know that our loved ones are always with us in spirit. She also felt Anaiyah would love this story shared as well and told me I could share her photo too, adding that she was always a “show-off.” 😉

Pure magick all around and on my end, just another of the ways my powerful angel bunnies demonstrate their presence and supportive orchestration of things in my own life.

I’m so happy to come to know Anaiyah through Jane and that Jane and I have made this sweet connection via our angels.

← That Settles it, “Writing is Hard.” -Yeats
VegNews: BUNNIES ARE PROBABLY THE MOST AMAZING ANIMALS EVER. HERE’S WHY YOU SHOULDN’T EAT OR EXPLOIT THEM. →