← Be Soft, Be Strong
October 2019 Energy Update with Lee Harris →

September flew by just as fast as perhaps our Autumn here will. Jack Frost has already been appearing on the scene with now bringing us three snow falls way ahead of schedule. The most recent have been over the last two evenings/nights beginning on the Libra New Moon, creating a merging of seasons and putting all the forest creatures on high alert that their usual Winter preparations need to speed up. 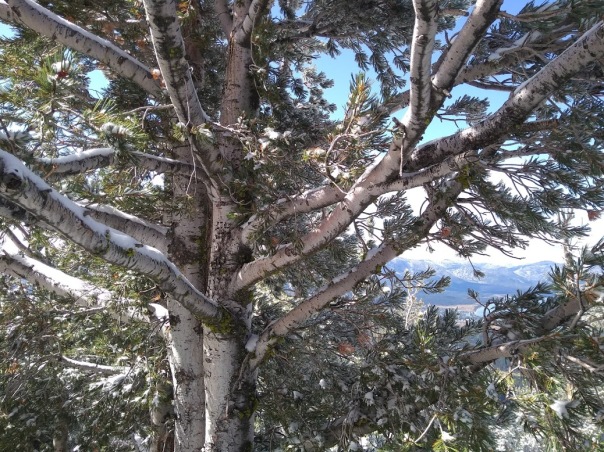 Tomorrow will be the first day of October already and it’s created a flurry of creative energy for me to match what I’m seeing in my garden and outdoors.

There’s still a dance of blooms lingering from a later-than-usual-Summer, colors bursting from the onset of Autumn, and Winter’s kiss wanting to play with it all. 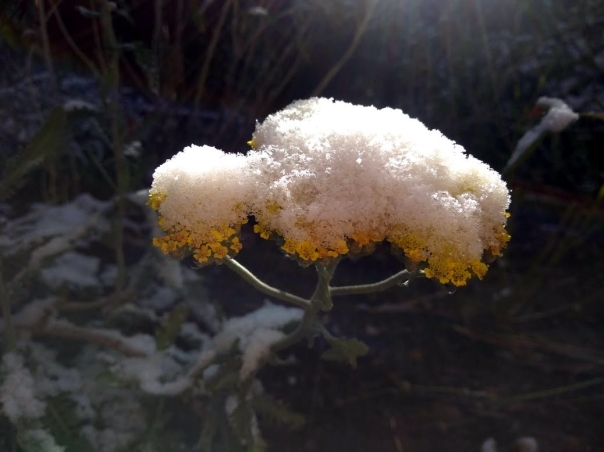 This intermingling seems to whisper the power of the in-between, integrating, percolating, and the gray area, rather than everything seen as only black and white.

I’ve seen myself literally go from tank top hiking and biking or bathing suit beach time one day, to winter boots, jackets and gloves the next. 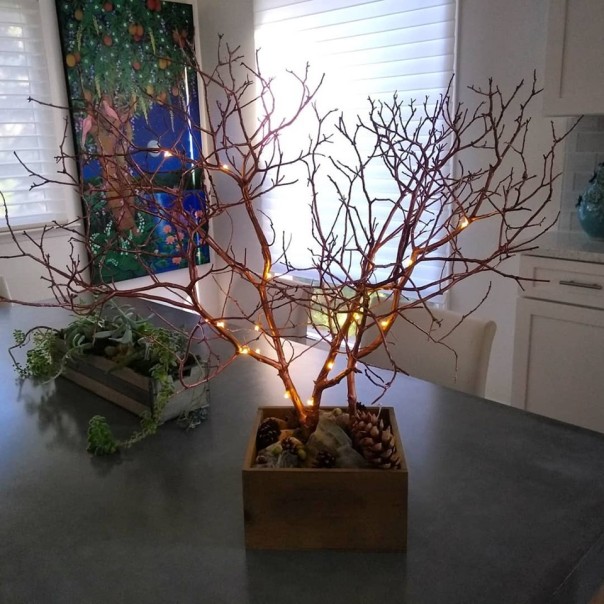 Meanwhile I’ve continued busily immersed in harvesting, drying herbs, bringing pots in for the season, organizing, clearing and completing, focusing energies toward important things culminating in my life, as well as diving into seasonal baking, creating new dishes, making things from nature finds, revving up a little creativity for a shop update this or next week, and more fully shifting gears into client sessions and writing. 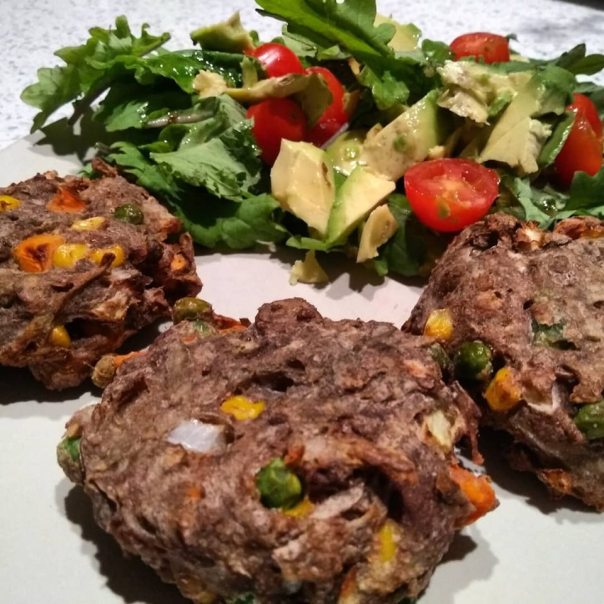 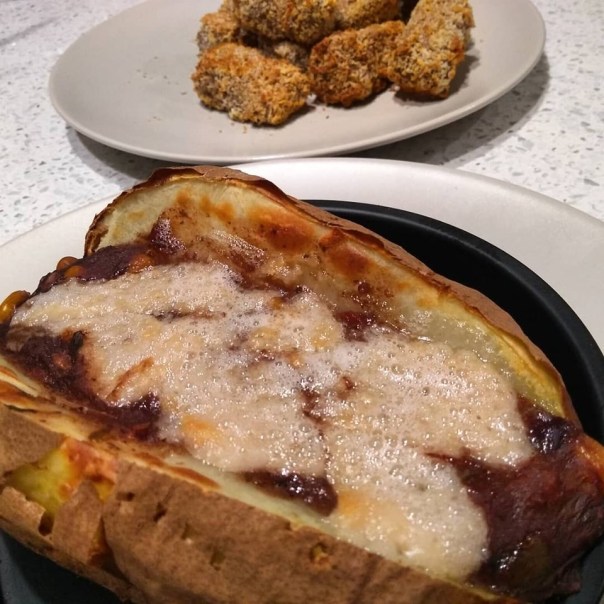 Air-fried baked potato with chili and melted Myoko’s fresh vegan mozzarella (crispy breaded tempeh in the back to accompany it, also air-fried) 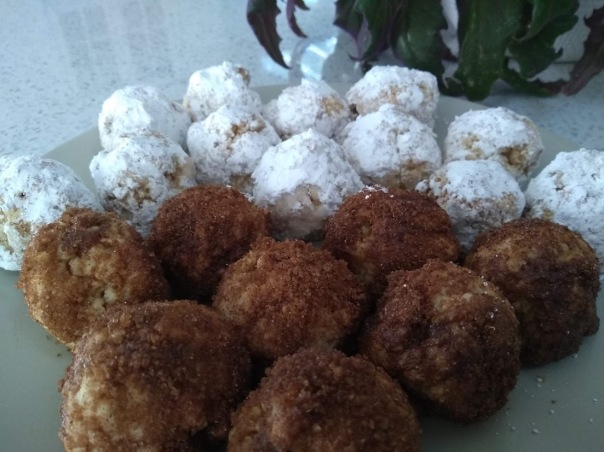 The latter two really reflecting potent change, as the amazing clients I’ve been working with are committing to and experiencing some huge life shifts into greater wholeness and my book is going through a major holistic transformation. Even energy sessions have gone into higher-gear of experience at both ends.

The Libra New Moon feels to have really activated that sense of balance to a deeper level and all of these rapid changes seem to speak to creating even greater alignment, less separation, and more harmony and compassion between opposites. All in effort to prepare us to experience and create greater comfort with continued change and the unknown.

Things can seem contradictory, but they in fact just are and we place a judgment upon them. 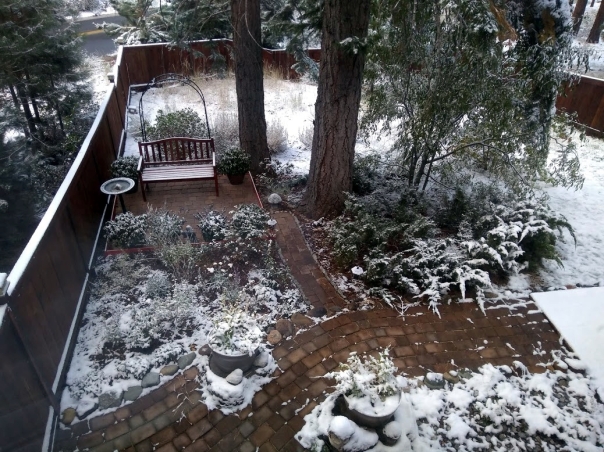 View of my garden from above

During September, a continued increase of synchronicity and manifesting has been unfolding, which I’ve heard from others too, including even more magickal finds nature has gifted and much deeper connections with the forest animals (actually one just took place while writing this with a giant gray squirrel walking up to my office door that was definitely not “just” a squirrel and whom I’ve not seen here before).

Here he is right after he left my office window – he peered in and was very human-like in his gestures. Astrid was laying on the castle tower right next to the glass door. 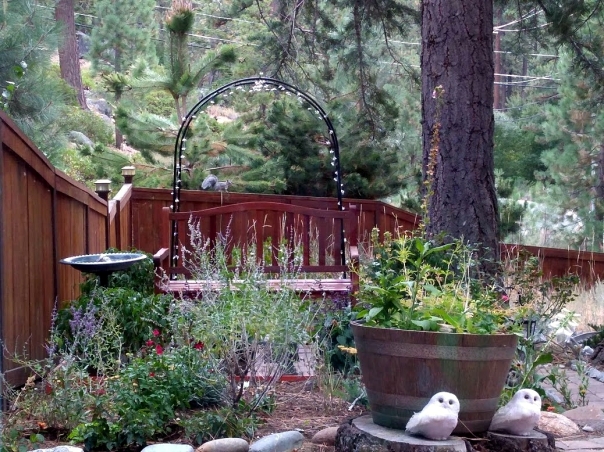 Here he is through the arch portal heading back from where he came. He sat still here quite a while.

Another photo of him on the tree after leaving our office door. Hard to tell, but he was huge and you can see his gorgeous bushy tail here.

Telepathy is on all-time high and I find an increase in experiences where I simply have to merge my thought with feeling and someone will answer me directly without ever contacting them. 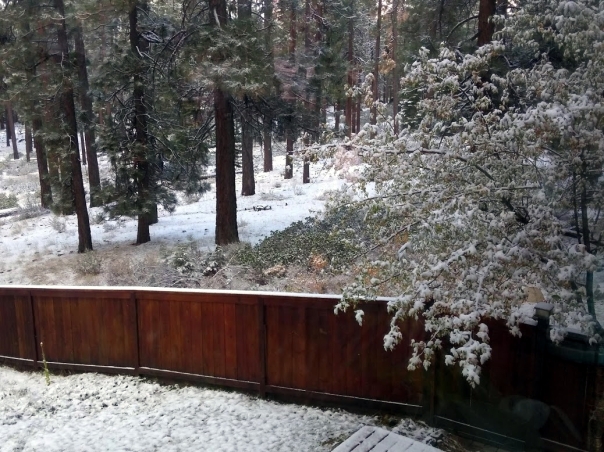 Yard and forest after the night’s snow

These have increasingly been the norm for people living with more daily awareness, but I’m definitely sensing a new octave is being fine-tuned, as things accelerate.

And speaking of synchronicity and alignment, I’d like to share this merging of both bitter and sweet.

Here’s a story that unfolded on Saturday’s New Moon – the day snow blew in here, a surge of creative energy blew through me, and right after my wild rabbit friend, Hope showed up the evening before.

As you may recall, I’ve recently been offering some of my animal spirit paintings to best offers and donating proceeds to rescue rabbits.

The most recent painting that found its home was Visions of Atlantis, the two dolphins swimming around an ocean vortex with a small orb bubble between them subtly revealing a temple in it.

The painting was supposed to arrive last Monday, the 23rd on Autumn Equinox. It didn’t arrive until this Saturday on the New Moon to Michigan. This past Saturday also happened to be International Rabbit Day.

Its new very aligned keeper (fellow dolphin lover who has been to The ARC – Atlantis Rejuvenation Center that my friend Jenny used to own, but recently sold, where I’ve hosted some retreats and saw the print of my dolphin painting framed in a room there that I’d given to Jenny) went on to relay what happened within less than an hour of the painting arriving.

This woman went outside to take care of things on the land of her organic farm and laying oddly in the grass among fallen apples was a wild rabbit. She went closer and saw that his back legs had been injured in some way, as they weren’t functioning properly and he really couldn’t use them. So she gently picked him up and took him inside, creating a warm, safe nest for him and fed him fresh rabbit delights and water.

She saw no visible injuries, blood, contusions, or swelling and his vitals looked good. One thought she had is that perhaps a large bird of prey had picked him up, but dropped him. But who knows what other things were at play.

When she told me this and showed me a photo, I immediately thought of my special needs rabbit, Cosmo. I said it sounds like he has spinal injury and/or potentially broken back. The way he laid in the grass with legs out, reminded me of Cosmo and his graceful little legs that couldn’t work due to his spinal injury.

So far, he’s doing well, aside from not being able to move properly. She’s nursing him and he’s relaxed, resting, and eating – happy to be cared for. I’m not sure if he’ll end up needing to stay with her or have to go to a wild life rescue, as if he does have an incurable injury he won’t be able to return to the wild. I told her a rabbit vet can help to figure out what’s wrong. He’s under her care for now and their lives have merged for a reason.

The synchronicity to this story is multi-layered. He showed up right after my painting arrived that helped fund rescue rabbits. It happened on International Rabbit Day. All week she’s been staring at rabbit artwork for a project (one of which was a rabbit angel with wings and another looking very similar to this wild rabbit). And Cosmo has been coming through a lot for me this week too, while Hope showed up just at the onset to the New Moon.

I’m so glad the rabbit found this woman, who is a sweet animal whisperer herself – two angels merging.

There have been some cool stories around the other paintings that have found new homes too and even many of the creations and gifts I’ve sent off. I’m in awe always of the beauty that unfolds and the alignments that take place when someone listens to those inner nudges.

I’m doing my best to listen as well and letting nature lead seems to be the dance to follow.

I feel like September’s surge of creativity and completion is a clearing out of energy making space, or rather, allowing me to be even more present to what is anchoring as my new.

We can have residual energy on many levels whether emotional, mental, physical, creative, psychic, etc. For me, I’ve felt a need to let go and let out ways I’ve funneled creative energy so I can get to the heart of creatively being. And this is linked to helping with my writing for sure. 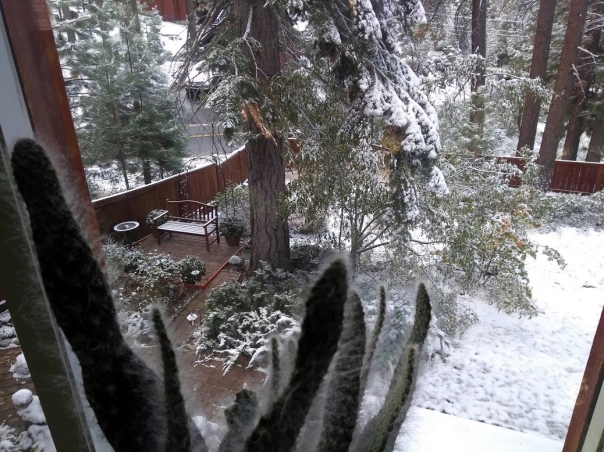 The merging dance where worlds can meet and mingle, reminds me of that “being” and how energy can become whatever it wants simply by allowing and not trying to box it in.

I love the Autumn/Winter show going on right now and feel October will bring graceful surrender into what all of this is revealing. 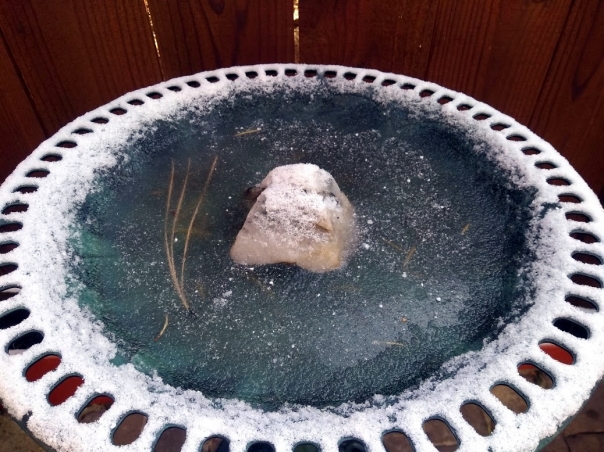 Love the Autumn-fallen pine needle frozen inside the bird bath water. So many birds and squirrels were sipping from it just the day before

For you, it may be a different kind of dance and merging taking place that is relative to your life, but in some way it likely is leading to a more natural and integrated flow.

Are you experiencing the merging of worlds right now in your life?

What does it speak to you?

Posted on September 30, 2019, in Uncategorized. Bookmark the permalink. 8 Comments.

← Be Soft, Be Strong
October 2019 Energy Update with Lee Harris →