Here are some magical and sacred “personal portal” specials I’ve been nudged to offer, as I open my own new personal portal into the collective with the birthing of my new dragon tattoo.

Please read the link for ALL DETAILS and significance with the energies now and upcoming! Great for gifts for self and others. No limit on how many you can purchase, but must be purchased by 11-22-11 and can be used any time. With the potency of where we are and we’re headed, and with holidays and a new year around the corner, these are great ways to harness those energies in a transformative, healing and empowering way towards your intents in alignment with the now!

Embrace your own inner magical dragon! 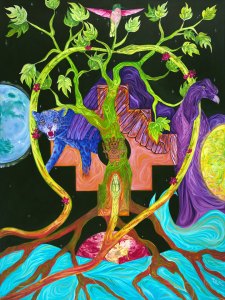 An “ark” by definition and historical understanding was a vessel built by Noah to house and keep safe his family and pairs of every animal of the Earth. It is also known as a sacred chest where the ancient Hebrews kept the two tablets containing the Ten Commandments. In either form, it is seen as a sacred and protective structure that contained the promise of a new life where a new architectural system of life codes would be embraced and instituted to start anew.

We have entered a time when a new way of life and the call for a new code of life is upon us once again. Cycles repeat themselves, as is apparent throughout the history of this Earth for every ancient civilization that has walked upon it. A time comes when change is much needed and there are always messages, signs and guidance being provided if we learn to be present enough to listen and see. This does not necessarily mean the destruction of the Earth is to come, but it does mean the end of a way of life and being is completing and a new form is much needed to be embraced.

According to shamanic belief, everything is alive and carries with it a wisdom and power. Shamanism is found in all cultures of the Earth and is the world’s oldest healing tradition. This ancient, worldwide practice involves engaging with spirit helpers and the forces of the natural world to develop relationships, solve problems and perform healing. Shamans travel to the parallel worlds where time and space have no meaning and use the powers of those worlds, the subconscious and the realities of this world to cause change. They are able to go within and enter an altered state of consciousness at will, in order to contact and utilize a hidden reality that most do not consciously perceive.

According to the shamanic and ceremonial traditions of the Inca, there are those known as naguals. Naguals are a form of very powerful shamans that unlike man that is driven by psychological ego desires, they have none. They are conduits of Spirit, receiving orders from an indefinable and indescribable source. Almost a non-entity, they have learned to break the psychological conditioning of the cognitive division that keeps us cut off from our sources. They can magically assume the physical manifestation of a different entity by shifting into its energy pattern, yet remain the same in Essence, since everything is energy. There are considered to be two different forms of shapeshifting wherein either the luminous body changes into a power animal or the physical body on the Earth plane changes into an animal.

Power animals are essential to shamanic practice, as shamans believe that everyone has power animals. These power animals act as guides or angels, imbuing their individual energy, power and wisdom to guide, heal and protect you. They provide the wisdom of their kind and are not only limited to mammals, but can also be reptiles, insects and sea creatures. Any living creature can serve as a power animal and plants and trees can serve as plant spirit guides, providing their own wisdom.

Depending upon the culture, the gifts each animal provides can vary, yet there are many consistencies across the board as well. It is important to let the animal speak to you in the way meant for you and to be open to their sharing without limitations. Shamanic practice honors with awareness the wisdom and life in all things on Earth, understanding and believing that everything has something to teach. Many western cultures do not get taught to value animals and the gifts they have to help support our lives and the world at large. Animals show up for us in many ways and they are believed to communicate with us by drawing our attention to things, sometimes through repetition. They try to get our attention because they have some wisdom to impart and are most eager to be of service.

We are all connected and we have each been part of all of the cultures, races and religions on the Earth. Animals are transcendent beings that speak to us in a boundless way, free of judgments or enculturated restrictions, which our ego minds would otherwise be closed off to. It is this reason I was guided to bring forth their messages through my paintings, which began as a series called, “Universal ARKitecture of the New Earth.”

The animals have messages for us on individually personal and collective levels and spread their love and wisdom to help us embrace the new energy. These sisters and brothers share the same consciousness and will voice their storytelling messages of healing, each in their own way, offering us keys and insights to a new code of life for embracing. These medicine beings hold antidotes for a new “ARKitectural” plan of the New Earth.

“Universal ARKitecture” was communicated to me and it basically speaks of sacred vessels, which I see as the paintings to be channeled and created, housing within them messages, codings, energy, keys….spoken through the many voices of the animal spirits of the Earth and uniting us through a Universal language and symbolism that is of the Earth and beyond.

Their Essence will encompass an ecclectic tapestry of interwoven threads that span and honor the many ancient, forgotten civilizations and world religions of the Earth’s history, as well as intertwine Earth and Cosmic dimensions, past, present and future. The power animals and shape-shifting “naguals” emerge through timeless energy portals to share their wisdom and powers. This is in effort to help guide us with supportive keys for co-creating a new Earth with conscious awareness, embracive remembrance and visionary innovation. Subliminally sublime is the supportive guidance they offer and the journey began through the path of the Major Arcana of the Tarot and my first piece titled: A Walk Between Worlds: “Hatun Karpay of the Nagual” (The Great Initiation of the Nagual/ Powerful Shaman).

The Tarot are a highly symbolic deck of cards consisting of 22 Major Arcana cards and 56 Minor Arcana cards. Arcana means secrets or mysteries, which is why deciphering the symbols is half the gift of the translator, viewer or experiencer of the cards and their images. The original concept of Tarot and deciphering the symbolism they hold dates back to early Egypt and India. The gypsies also used them on the banks of the Mediterranean long before they were used by the Renaissance schools and a revival of their use and interest has surged in the middle of the 19th century and continues today.

The Major Arcana (Latin meaning “big secret”) cards are the first keys to our initial understanding and is at the heart of the Tarot. They deal with the human condition and symbolize a whole range of human life and experience, representing the joys and sorrows each man and woman can experience in a lifetime. They are 22 cards that illustrate the human drama through the strengths, weaknesses, hopes, fears and the lightest and darkest parts of an individual; basically the physical, mental, emotional and spiritual aspects of humankind. This is demonstrated through an archetypal figure or figures that express a specific Essence of real and abstract symbology of a person’s life.

I started with the 21st card, the “World” card, to embark on a journey through an experience of life spoken to us through the animals and all of these elements expressed. It encompassed the ancient Incan symbolism and energy of the four directions and the Incan Medicine Wheel. There is the potential that more paintings will encompass some of or all of the Major Arcana or simply and potently come through as animal spirit guides with collective healing messages for the New Earth. It is hard to foresee the inspired channeling that will come through, as I do not direct the messages and visions received and what is needed. I am a conduit for their expression and can merely share the Essence I am sensing is wanting to reveal.

Either way, each painting will represent a key to a potential new code of life, beginning with completion and ending with completion, as every moment is perfect, whole and complete and constantly cycling into new creation. The “World” card represents all elements coming together, which is where we left off in Essence with the In Lak’ech series of five I created. Each of those paintings represented one of the five elements and now we begin with all five coming together in wholeness through “A Walk Between Worlds,” offering us a way to embrace this wholeness and energy in the now, as our experience of life on Earth, individually and collectively.

We then may move through each of the Major Arcana cards 0-21 starting with the Fool, which marks a new beginning and spiritual awakening.  As we learn to integrate the Essence of the symbolism each holds, we then begin to build a new foundation and new Earth code within each of us. This will take us full circle, ending once again with where we started at the “World” card (a whole New World/Earth) and a new model for a new collective experience of wholeness and harmony takes shape. 23 paintings in total, if the Major Arcana channel through in totality, providing supportive, foundational tools that represent a life journey to a new existence as a Conscious Global Human Being collectively connected in Universal Oneness.

It is my hope that these paintings will also help to bring conscious awareness of the animals on the Earth and aid in supporting their precious lives, while providing deeper understanding and compassion amongst us all. We are all connected and every living being holds infinite intelligence integral to the circle of life and has its own unique Essence that creates a colorful thread in the tapestry of magnificence we know as Universal Consciousness.

To order and view a larger image of “A Walk Between Worlds” http://taniamarie.com/gallery2.htm