A Blue Moon is the second Full Moon in one month and October 2020 illuminates just that for us, with bookending Moons at start and end. This Full Moon is in Taurus and being a Blue Moon will add an extra magickal boost and thinning of veils all falling on Halloween/Samhain.

And to add to that extra magickal boost, Astrid sat herself below center of my painting titled Once in a Blue Moon (as seen below), wearing her Moon and Star dusted Cosmic witchy/wizard hat, to anchor her own message and infuse some rabbit alchemy to the mix.

Since Full Moons showcase a rabbit in the Moon, her point is well taken – I always listen when she “speaks”.

So much is culminating as year end draws near and the energetics continue to rise in ways that point to the continued importance of self care, preparation, inner work, anchoring, and maintaining your own equilibrium.

If you can be open and ready for the unexpected, stay focused on what really matters and is of most value to you, tune into, listen, and support your body’s messages, feel and channel through the sensual aspects of life that make you human and are the gifts of spirit in body, and embrace the changes that have ability to put closure to things, you will find yourself in a much more strengthened and empowered place to navigate the waters of the journey ahead.

Since Earthy Taurus is the focal point of illumination, body and Earth speak loudly now and that might mean extra time in the great outdoors Mother Nature gifts us with, or anything nature-connected so that ultimately you’ll be immersing in some mystical communions with the nature of you.

It’s a great time for mischievous magick, intention-seeding, or your own version of mystical, love-filled spell-casting in Nature’s womb of creation, illuminated by the Full Blue Moon.

This last week we’ve been doing just that, as we created space for another Earthy immersion – this time in the Arizona sunshine and waters of Lake Havasu City to celebrate with our dear soul family we haven’t seen in a long time. I’m grateful that opportunity came to take some safe, distanced outdoor-focused excursions recently. Last time it was the ocean and faery forests of the Pacific Coast, and this time it was the red rocks, desert sands, and warm waters of the Colorado River and Lake Havasu – different, but equally nurturing, enriching, and cleansing.

And with the building of the Full Moon energies in the night sky, coupled with Arizona sunsets, the Earth and Cosmos merging has been felt strongly in the body and soul.

This was amplified by the ability to connect with my sweet nephew and godson, Nova, (whom you’ve read about in a previous blog) who helped me tune in with my dearly departed rabbit son, Cosmo.

Nova is just as sweet and perfect as I knew he was – such a tiny faery bunny who loves snuggles (he’s about 2 pounds lighter and several inches smaller than Astrid). Tuning in with him this last week was timely because Cosmo has been on my mind being that Halloween was the day he transitioned, four years ago. The Universe knows what we need and Cosmo always finds a way to communicate and send me love. This week, through the adorable Nova.

And to add to that energy, it was such a gift to see this sweet Burrowing Owl on one of our evening walks.

I haven’t seen one in years. The timing felt particularly potent. Although not the clearest photo, I’m surprised she even showed up given the evening lighting casting dark shadows in her burrow. But I love the way she did because it adds to her mystical energy and deep mystery.

Owl is one of my key spirit animal figures for my path, which I had reiterated by a favorite reader in Sedona, Arizona upon twice visiting him, but especially particular species of owl. Their feathers show up prolifically these days. They carry the power of sight, intuition, and hidden wisdom that reveals the true reality which is hard to be seen by others.

I love this interesting information about Burrowing Owl from http://www.pauldfrost.co.uk/burrowowl.html that mirrors the time of year right now before Halloween/Samhain (time of thinnest veils) and the upcoming Full Blue Moon.

The American Indian Hopi tribe called the Burrowing Owl Ko’ko, meaning ‘Watcher of the Dark’. They believed it to be associated with Masauu, their god of the dead, the guardian of fires & protector of all things underground, including germinating seeds, making it a very sacred bird. As the owl lives underground, it was believed to be able to communicate with the dead.

The American Indian Gosiute tribe (from Utah and Nevada) believed the Burrowing Owl to be a protective spirit for brave warriors. Owl feathers were worn by the warriors & rattles were covered in owl skins, to frighten off their enemies.

And the owl energy continued, as the very next day after an evening with Burrowing Owl, it was all about Great Horned Owl. With two, rare physical encounters with owls back-to-back I’d say something’s afoot.

“Every real story is a never ending story.” ~The Neverending Story

Our nine and a half mile expedition of the senses was a literal Neverending Story journey with all the major characters showing up in rock formations, including the magickal gates that guard The Southern Oracle – The Great Riddle Gate with two Sphinxes (in this case we had two sentinel rock portal gates that included one naturally carved into the Luck Dragon, Falcor, himself), a perfect Morla rock – the giant turtle known as The Ancient One, Rockbiters and Big-Headed Rock Creatures. It was incredible. There were also snippets of Lord of the Rings and the journey to take the golden One Ring to Mordor and a bit of The Secret of Nimh when Mrs. Brisby meets The Great Owl in his bone-laced lair. Wow!

The latter literally manifested a Great Horned Owl that greeted us upon entering the slot canyons. We saw her emerge from her big nest perched between the narrow slots and take to flight down the corridor, coming to rest up on a ledge of the rock walls ahead, as seen here ever-so faintly.

The rest of the time we walked down the slot canyon to the desert beyond, on our way to a secluded beach on the lake, we kept finding a variety of small to medium sized feathers amidst all the bristle brush at the bottom edges of the rock walls.

We also discovered a lot of small bones and skeletal parts of the little animals she fed on – both on the ground and contained within owl regurgitation.

We wondered if she’d be there again on the way back, and indeed she was.

She greeted us once again with a fly-over (enabling a photo capture this time), and more feathers, including a large one I found during a funny episode of me shimmying up the rocks we had to climb down into the slot canyon.

While literally suspended at the top, flat on my stomach with arms and legs flailing out as if I was swimming, since I was having trouble getting up, this put me in the perfect position to see a large feather at eye-level to where I was laying. I stopped everything between two people pulling and pushing at each end to say, “Hey! Look at that perfect large feather behind Dave!” We all laughed. Nothing stops my hawk eye from seeing magickal discoveries, nor gets between me and them. I always seem to provide comic relief for everyone and this one was caught on video.

The slot canyon felt like the Great Horned Owl’s lair Mrs. Brisby bravely enters on her journey to the Rats of Nimh, and the whole energy and finds of the day without a soul but the four of us, plus all of the things we kept discovering (ancient petroglyphs in the gorge walls of the Colorado River, Osprey twice flying above us as trains passed over while we went under the bridge on jet skis, a monarch butterfly gliding by us on the river – butterflies are said to be ancestors returning, and more) and having revealed during the rest of every adventure-filled day this week, made for the perfect lead-up to Halloween and the Full Moon.

And so, during this liminal time of year when boundaries are at their thinnest to the Otherworlds, it feels like the Universe conspired with my/our intentions in supporting the energies and experiences of greatest benefit, and revealed the way showers for the journey ahead.

Alongside several nature treasures, I even found this sweet, little, brown faery bunny at a store to bring back for Astrid (with detachable wings) – the perfect find for my magick rabbit

If we want to create some meaningful experiences for this doorway, we have the support of many beyond the veils – the Fae, ancients, ancestors, deceased, and even right under our feet – Mother Earth, around us – animal and Elemental messengers, or in the stars – the Cosmos and our multi-dimensional selves and star families.

And speaking of all of these mystical and potent energies, Astrid and I thought we’d share some of the magick we’re conjuring up at the Forest Portal mixed with Faery rabbit enchantment and wonderfully witchy wishes from our hearts to yours.

With a blend of Earthy and Cosmic ingredients, we’re always brewing up some fun and love to bridge the gap between the shadowy depths of the heart.

The photos you see laced throughout this post capture the alchemy we create together and love spreading out into the world as cocreators.

You got a glimpse of Astrid’s new cosmic witchy/wizardy hat back on October 1st’s Harvest Full Moon, but we saved the extra enchantment for October 31st’s Full Blue Moon.

And I just had to reshare this fun from 2019’s Halloween post, which came from my BinkyBunny.com newsletter I subscribe to.

It felt particularly fitting with this year’s photos of Astrid and me. I think you can see why. 🙂

Today’s Halloween, Samhain, and Celtic New Year is a portal to access and create realities to mirror your true multi-dimensional self.

May the key become conscious for accessing more of this each day.

And may all possibilities be open to you.

In love and creative magick,

What Is Your Witch Name?

For all my fellow witch and wizard friends…here’s a bewitching little break in your day to celebrate the coming 31st of October. Thank you to my friend Kenny for sharing this!

My name is “Bewitched Wand”. What’s yours? 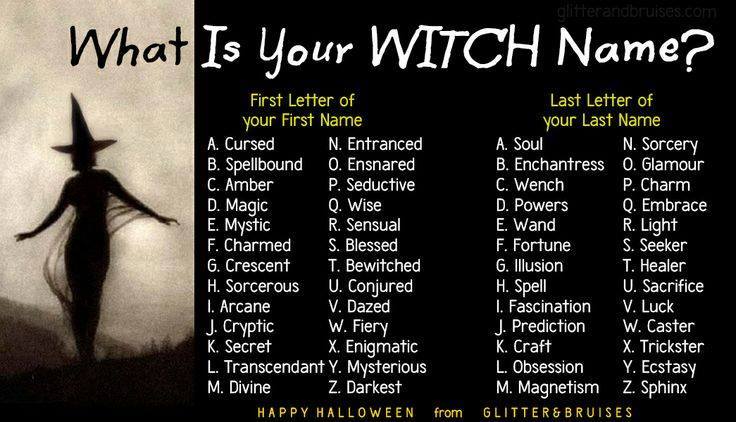